‘Swimming in safety’ and Roma 2022: the open water competition site to be inaugurated on Saturday 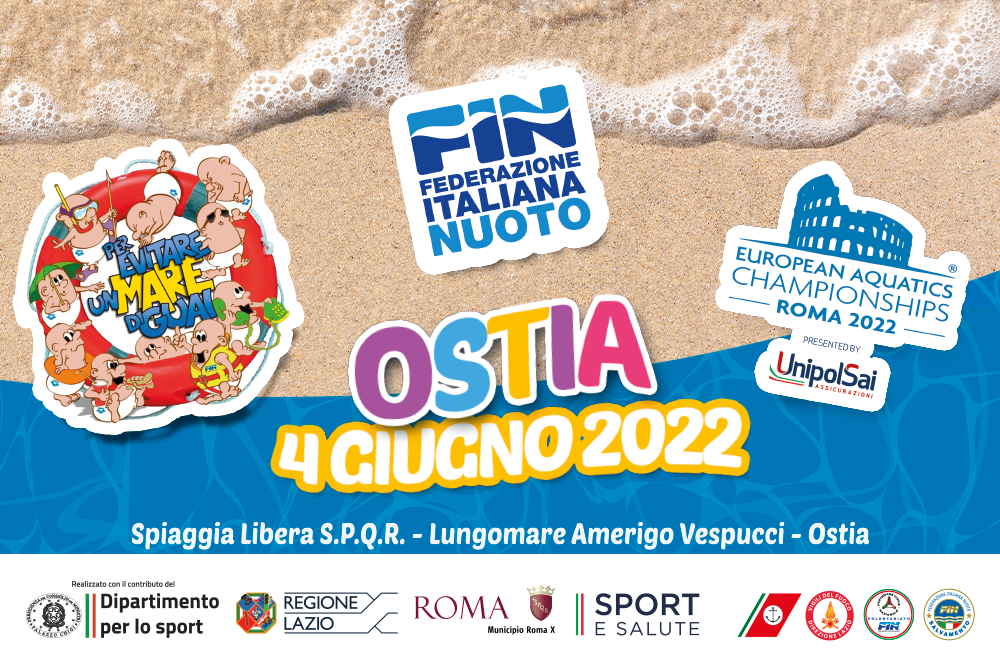 Water culture and accident prevention. The European Aquatics Championships takes centre stage in the dissemination of techniques to responsibly swim in the sea, in lakes, rivers and private waters, and in promoting its exceptional social relevance. It is not enough to know how to swim: it is better to know the basic 'lifesaving' rules.

On Saturday 4 June, at 10:00, Ostia will be the setting to promote the promotional campaign 'Water and I – swimming in safety. To avoid lots of troubles' with the inauguration of the SPQR free beach, on the Amerigo Vespucci seafront, as Roma 2022 open water swimming competition site. The beach has been entrusted by the Municipality of Rome X to the Italian Swimming Federation for the European Championships. For the event Gastone, the Newfoundland dog chosen as one of the two living mascots of Rome 2022, will attend the 'ribbon-cutting ceremony'.

On Ostia beach, Italian Olympic champion Gregorio Paltrinieri and other European champions will compete in the open water swimming event from 18 to 21 August (5km, 10km, 25km and relays). The same competition venue will see masters swimmers of all ages take on the natural waves of the Roman coastline from 24 to 26 August (3km) for the European Aquatics Masters Championships.

Ostia beach will also host one leg of the 2022 edition of the project 'Water and I - Swimming in safety. To avoid lots of troubles', designed by the Italian Swimming Federation and Roma 2022 in co-operation with the Port Authority-Coast Guard, Civil Protection and the Fire Brigade, and with the support of Rome X Municipality President Mario Falconi, the Rome X Municipality Director Carla Scarfagna and the Sport Councillor Valentina Prodon. This event over the years has become a fixture on the opening of the bathing season, in the name of prevention and water safety, which are at the heart of the Italian Swimming Federation’s mission.

An estimated 200 children will be welcomed by the guests and will receive gadgets and a card to be filled out with five stamps corresponding to five educational topics: aquatic safety, first aid, environmental protection, canine units, and competitive lifesaving activities. The day will end with a sea rescue simulation featuring lifeguards and FIN rescue dogs with the main lifesaving tools: skate, stand up paddle, prone paddle board, floating spine board.

Lifesaving in Italy was officially founded on 28 September 1899 in the city of Ancona with the aim of disseminating rescue and first aid training through swimming. Since then, the Italian Lifesaving Society and its sections distinguished themselves through intense educational activities based on teaching swimming movements, lifesaving courses and first aid for asphyxiators (the basic programme was adopted by the Armed Forces). The courses usually ended with competitions and tests on swimming skills and rescue.

In 1936, the Italian Rescue Society merged with FIN and became a section of it, namely Rescue Swimming. Over time, this synergy has produced incredible results, especially on a social level, to the point that the Italian government authorities in 1960, at the end of a long decision-making process, recognised the FIN Sezione Salvamento patent as a valid qualification to carry out the activity of lifeguard assistant.

The activity of lifesaving in Italy - in tune with a constant search for high and specific professionalism and in line with the changing social realities of the country, increasingly aimed at protecting the Environment and towards Civil Protection - has been further activated with a huge commitment of resources, in the creation of highly specialised federal centres for rescue and survival on lakes, at sea, on rivers and in the event of floods; to guarantee helicopter assistance with specific projects and programmes of public utility and with the adaptation of instruments and means at the service of operators, including the use of jet skis and rescue dogs, which have revolutionised rescue operations by speeding up and improving intervention times.

Within the national organisation, the lifesaving section of the Italian Swimming Federation plays, through its garrisons throughout the territory, a decisive role in the training, and subsequently in ensuring the updating, of lifeguards; in synergy with the Civil Defence, the Coast Guard, the Fire Brigade, the Italian Red Cross, Regions, Provinces and Municipalities, also within projects for the protection of the marine environment.

Through its efforts, together with the training of Bathing Assistants and the promotion of swimming, the Italian Swimming Federation has thus enabled a progressive decrease in water accidents and drowning deaths, making Italy one of the safest countries in the world. The results achieved in the field of safety in the water are a positive example and model for other world associations working in the field of lifesaving. The commitment, the professionalism of the excellent people employed by the Italian Swimming Federation's lifesaving section, and the quality standards of the training course are now recognised internationally and are fundamental parametres of the entire movement, which is also represented at a competitive level by senior and junior national teams that emerged in recent years at world and European championships.