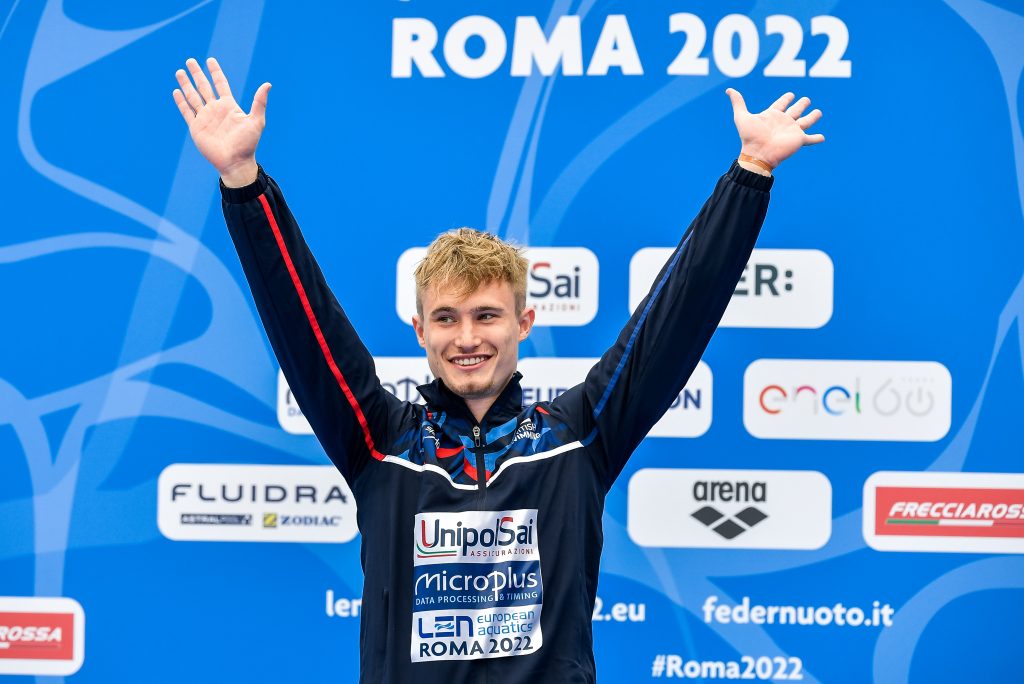 Jack Laugher and Anthony Harding helped Great Britain towards a best-ever European Championship medal haul with victory in the men’s synchronised 3m springboard final on the final day of Roma 2022.

That took the nation, who were awarded the Roma 2022 diving team of the tournament trophy, to a combined haul of 12 (six gold), beating their previous best of 11 (and three golds) at the 2016 edition in London.

16-year-old Ukrainian Oleksii Sereda, who became the youngest-ever European championship winner when he claimed gold at 13 in 2019, won the 10m platform final.

After three-time Olympic medallist Jack Laugher finished a shock fifth in the individual event on Saturday the British diver had the perfect chance to respond with the synchronised 3m final where he teamed up with Anthony Harding. The pair claimed World silver in their first major international together in late June and followed that up with the Commonwealth title earlier this month.

Their Italian rivals Lorenzo Marsaglia and Giovanni Tocci were fresh from respective individual gold and bronze medals on Saturday though and they led after the fourth round. Laugher and Harding, who scored poorly in the fourth round, soon found their form though and two strong final routines helped them to an uncatchable total of 412.83.

“I’m so proud of what Anthony has done in his first year with three big competitions back to back and medals in all of them,” Laugher told LEN TV. “I’m also proud of myself for the way I’ve come back today, but now it’s time for a holiday.”

Harding, who won Youth Olympic silver in 2018 and is competing on the senior circuit for the first time this season, added; “It was great to be out there finally as I’ve been waiting all week for this event. “Our partnership is really progressing well and I’m excited to see how we progress next year.”

Timo Barthel of Germany topped the standings after the preliminaries, but he then followed that up with the synchronised 3m springboard final – where he finished fifth alongside Moritz Wesemann. So fatigue was likely to be a factor in his medal-push and something clearly was not right in his first round where he scored just 34.65 and then asked for a re-dive. The officials did not grant his request which realistically ended his medal hopes with five rounds still remaining.

Britain’s Noah Williams, who had only qualified with the fifth highest score, was top of the standings after the opening two rounds, but Oleksii Sereda placed first at the halfway stage.

He delivered 9’s across the board, to score 89.10 in the fourth round to move clear. Two further strong routines – including the first five to secure a ‘10’ from the judges, ensured he attained a total of 493.55 and claimed the second individual European title of his career.

Williams (459.00) would take silver, with team-mate Ben Cutmore outscoring Italian rival Andreas Sargent Larsen in the last three rounds to claim the final podium place with his total of 438.35.

“This means so much to me because it’s my first win at the Europeans since I was 13,” Sereda told LEN TV. “Back then I just did diving, but since then I feel much more pressure so today feels even better and I’m so proud to do this. A win for me is a win for Ukraine.”

Photos Andrea Staccioli / Deepbluemedia / Insidefoto Use of photographs is only permitted for publications registered for editorial purposes. Credits must be mentioned.