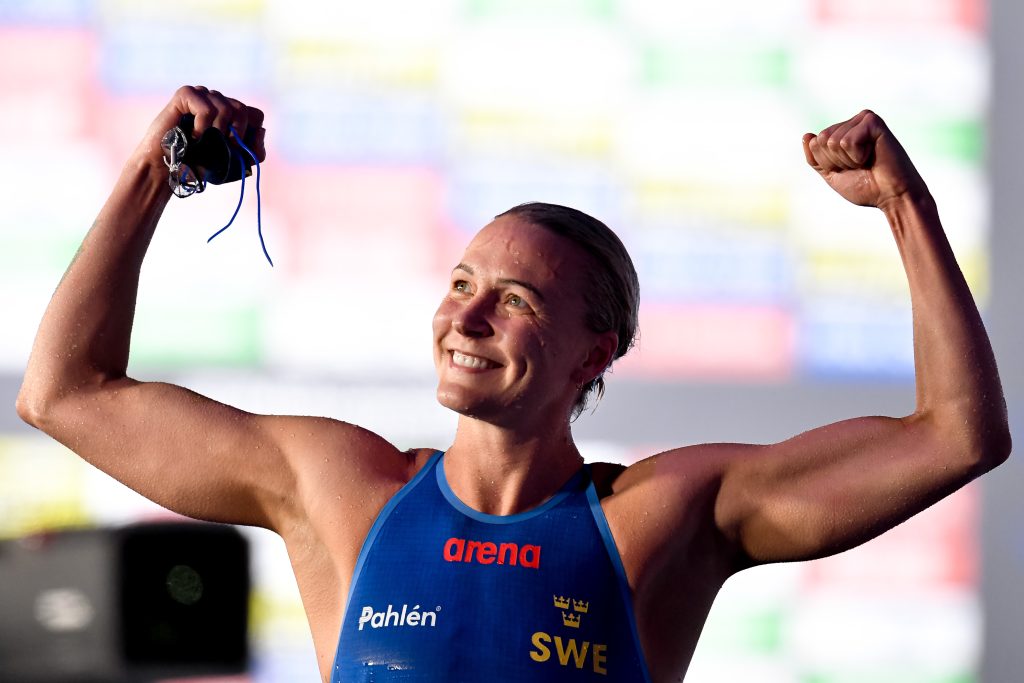 Following her exertions at the World Championships two months ago Sarah Sjöström chose to reduced her race programme for Roma 2022, entering just two individual races on top of her relay schedule, but the choices have certainly paid off. The 28-year-old sprinter powered to 50m butterfly gold in 23.91 seconds. Katarzyna Wasick of Poland took silver (24.20), with Valerie van Roon (24.64) completing the podium places. “I’m super happy with this gold medal,” stated Sjöström. “It always makes me happy when I can go under 24sec, even more when I manage to do in a final when it counts the most. “I think my number of medals continues going up and I’m really enjoying myself here. Now when I look up the stands and I feel the support and energy, I know why I’m doing this and why I want to go on.”

The biggest shock of day six arguably came in the men’s 1500m final. A capacity crowd at the iconic Foro Italico of over 7,000 were treated to a masterclass in distance racing, but not from the man they came to see – world champion Gregorio Paltrinieri. The European record holder, who won the 800m earlier in the week, led in the early stages of the 1500m, but it was his rival Mykhailo Romanchuk who surged ahead from around the 500m mark. Despite the cheers from supporters roaring him on Paltrinieri could not narrow the gap and it was the Ukrainian who would claim victory and defend the title he won at Budapest 2020. Damien Joly of France claimed an emotional bronze, which was his first-ever major international medal – coming at the age of 30. “These are hard times for me, especially mentally,” admitted Romanchuk, who has been based in Germany since the outbreak of war in his homeland. “These European Championships are so emotional, after the 800m free I was mad at myself because I screwed up the entire race, but somehow I managed to get back from there and get into great shape for this final.  “I think a lot about what is going on at home and my father who is in Ukraine, but I have to say a massive thanks to the German team as they gave me the opportunity for the preparations and for the Ukrainians who supported me.”

There were no such surprises in the men’s 50m breaststroke final where 100m gold medallist and home favourite Nicolo’ Martinenghi produced a sprint masterclass. The Italian, who won 100m world gold for the first time two months ago, looked confident before the start and delivered the performance he craved to secure a second individual title (26.33) in front of the partisan crowd. They would have even more to celebrate with Italian Simone Cersauolo (26.95) taking silver. Luca Matzerath (27.11) would claim his first major medal with bronze.  “I’m super happy with my second individual gold and my new personal best,” said Martinenghi. “It was a great race, it felt fantastic to be able to offer this race and this win to the best crowd in the world.”

Margherita Panziera won the 200m title earlier in the week but it was Italian team-mate Silvia Scalia who was generally seen as a stronger contender, even though Panziera had qualified with the quickest time. Perhaps with the burden of chasing a title lifted by her success over double the distance Panziera delivered a measured performance, timing her last length attack to perfection and claiming a second individual gold in 59.40. British teenager Medi Harris (59.46) continued her impressive breakthrough season by adding 100m back silver to her Commonwealth bronze two weeks ago. Dutch swimmer Kira Toussaint (59.46). who finished fourth in the 50m backstroke, fought hard to secure the final place on the podium. “I heard the crowd but I thought Scalia won,” admitted Panziera. “I couldn’t believe it when I heard my name. I carried out a major achievement with these two gold medals and at the end of a this season all of the hard work is paying off.”

With the Olympic champion and world record holder, Kristof Milak, lining up in lane four of the 200m butterfly final, the seven other competitors knew they were realistically only going to be contending for the minor medals. So it proved, with the Hungarian dominating this event from the 50m mark and eventually coming home in a time of 1:52.01, over 2.5 seconds clear of team-mate Richard Marton (1:54.78). Alberto Razzetti (1:55.01) of Italy added 200m fly bronze to his 400m individual medley gold achieved on day one. “It’s my first ever senior final at a European Championships and I got medal right away with a personal best – not a bad start, I think,” said Marton. “I’m overjoyed right now!”

Most eyes were fixed on lane one where Rio 2016 Olympic champion Katinka Hosszu was looking to take another step towards her 100 medal goal with what would have been her 98th success.  However, Anastasia Gorbenko claimed her first European title in the event in Budapest last year and was determined to secure her second. That she did, with the 19-year-old Israeli taking gold in a time of 2:10.92 seconds.  Marrit Steenbergen of the Netherlands continuing her stunning week with silver (2:11.14) – her sixth, following four previous golds and a bronze. Hosszu pushed hard in the closing stages, as did Britain’s Katie Shanahan but both would be denied a podium place by Sara Franceschi (2:11.38) of Italy. “I cannot believe that I’ve won,” admitted Gorbenko. “I’m very-very happy, I’ve worked very hard this year, I think sometimes the load was too much perhaps, but I achieved what I wanted.”

The event of day six was the mixed 4x200m freestyle relay, an event which is not part of the Olympic or World Championship programme, so a rare opportunity for women and men to team up in the discipline. Olympic 200m champion Tom Dean gave Great Britain a solid lead after the first leg. Although Matt Richards appeared to be suffering at the 150m mark he produced a brilliant final length to ensure GB maintained a body length lead when the women took over. Senior European Championship debutant Freya Colbert is enjoying an impressive breakthrough year and although French Olympic medallist Charlotte Bonnet gave her nation the lead at one stage, Britain still led as Freya Anderson took over. Her final 200m battle with Lucile Tessariol of France became something of an epic dual with the lead changing repeatedly, but in the final 25m the Briton delivered her trademark finish to secure gold in 7:28.16. Silver went to France in 7:29.15 and hosts Italy battled onto the podium, 7:31.85 enough to take bronze. “It’s a fantastic thing that we could win here in Rome,” said Freya Anderson. “That medal means a lot for us as we could defend our title. That was a huge race in a great atmosphere.”