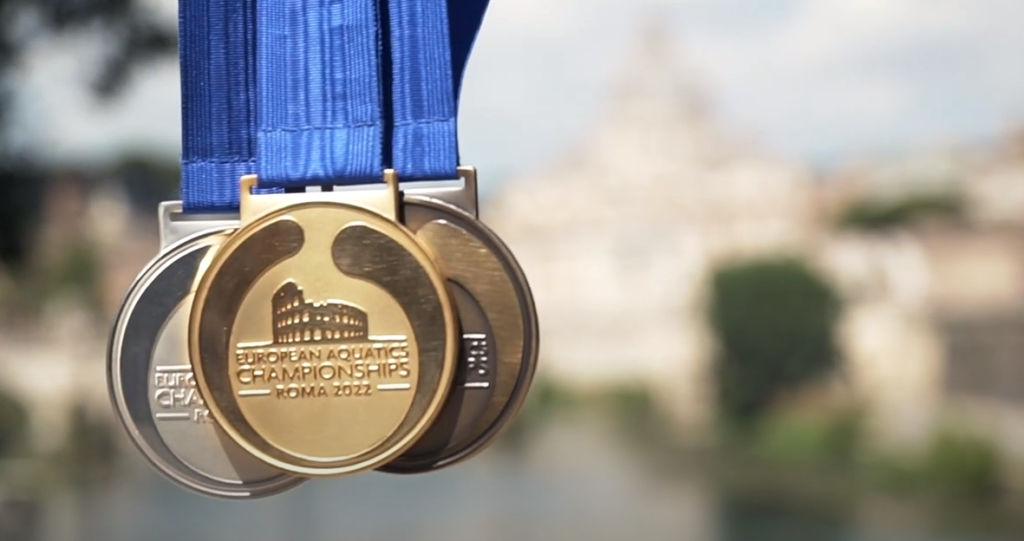 During a presentation attended by world champions Gregorio Paltrinieri, Lucrezia Ruggiero and Giorgio Minisini, Roma 2022 has unveiled the medals and the official video of the European Aquatics Championships (for swimming, artistic swimming, open water swimming, diving and high diving) that will take place in the Italian capital from 11 to 21 August.

The 231 medals up for grabs, made by the historic Fratelli Mortet craft workshop founded in 1891, represent the dream of the 1,500 participating athletes from 50 nations and depict the deep relation between sport and history. On one side of the medal there is a stylised design of the aquatic disciplines; on the other side there is the Colosseum embraced by a drop of water, the emblem of Italy's capital city and the stadium that was once the home of gladiators and naval battles, as well as the official logo of the event.

"After seeing the medals for the first time, I wanted to touch them,' says Giorgio Minisini, who paired with Lucrezia Ruggiero won two world gold medals in Budapest in the artistic swimming mixed technical and free duo events. ‘But you have to earn a medal. Watching the world championships in Rome 2009 when I was 13 years old, I realised that I wanted to be an athlete like them. I hope that the people who will come to see us, enjoy themselves and find the inspiration to achieve what they want in the future.”
"I keep thinking that I can't wait to compete," continues Ruggiero, born in Rome. "It is normal that you want to relive the feelings of when you stand on the top step of the podium, but as an athlete it is important to stay focused and calm, because goals can only be achieved through work. Now we are preparing for these important European championships."
"It is an incredible emotion to compete at the Foro Italico, the most beautiful pool in the world," multiple world and Olympic medallist Gregorio Paltrinieri adds. "Swimming is an individual sport, but we as Italy are a very united team. It was a fantastic world championship (Budapest 2022) for us and we hope to repeat the feat. There is no pressure, the races will be very similar to the world championships because as Europeans we are all fighting for the podium. I will try to get five out of five (gold medals)'.

In the official video, Roma 2022 ambassador Paltrinieri together with the Ukrainian national 400m freestyle champion Karyna Snitko ride a Vespa through the beauties of the Italian capital city. From Piazza Navona to the Acqua Paola fountain, from Piazza del Popolo to the Castel Sant'Angelo bridge and to the Trevi fountain where, respecting tradition, they toss two coins to express their wishes: the success of the European championships and the end of world conflicts. The video ends with the water of the fountain turning into the water of a swimming pool for swimmers, artistic swimmers and divers.

'We needed the empty city to shoot these frames among the beauties of the capital,' Paltrinieri explains. “It was a beautiful day even with a 5am wake-up call. The video is wonderful, have a look at it.”

In the Sala della Protomoteca in Campidoglio, Rome’s Municipality headquarters, Sydney 2000 Olympic champion Massimiliano Rosolino moderated the official presentation, which was attended by the President of the Italian Swimming Federation Paolo Barelli, the Mayor of Roma Roberto Gualtieri, the Undersecretary of State to the Presidency of the Council of Ministers with responsibility for sport Valentina Vezzali, the President of the Latium Region Nicola Zingaretti, and the President and CEO of Sport and Health Vito Cozzoli.

“The show with the best athletes in Europe is granted,” Barelli comments. “I am sure that excellent results will come. The Foro Italico will be the capital of swimming.” "The European championships will represent a great boost for tourism and for economic growth - continues Vezzali - and will bring people and young people even closer to sport.” "This event will serve to reaffirm the centrality and beauty of an extraordinary city,” says Zingaretti. "The unique charm of swimming, the great beauty of Rome, the spectators in the stands and all being connected from all over the world are unique ingredients for an event that will be unforgettable," Cozzoli adds. “Swimming and aquatic sports have always been very important for this city,” Gualtieri says. “It will be an event that will also help to strengthen the friendship among peoples.”